A father has been hailed a hero after running into his burning house to save his baby twins.

Ray Lucas, 23, and his girlfriend Shi’Ann Brown came back from a trip to the shops to buy milk to find their home in Eastpointe, Michigan, USA, engulfed in flames.

Click Here to learn the secrets on How I Made $5,000 per week working from home (Earn With Your SmartPhone or Pc)

Promote your songs, business brands, or any advert on naijajoy.com.ng contact us @ 08104028986(WHATSAPP), oluwasegunnani@gmail.com

Ray’s mother had been watching the girls and was in the front garden panicking and trying to get help.

Their twin daughters Malaysia and Milan, who are 18 months old, were trapped in the basement in their crib as the flames spread through the three floors.

Mr Lucas was not sure firefighters would arrive in time, so he dashed into the burning building to save his children.

“I was speechless. Action took over me. I ran into the house to get my babies,” Lucas, 23, told CNN. “I’m looking at it as a father. I did anything that any other father would do or should do,” he said. 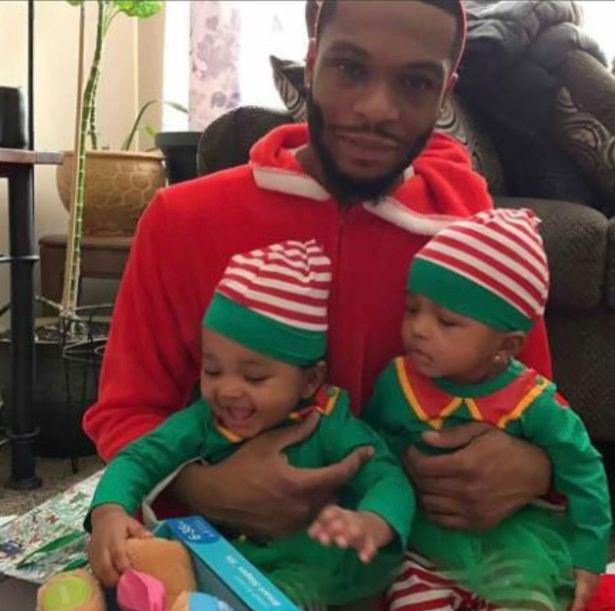 The fire on July 17 was spreading through three floors inside, including the basement where Malaysia and Milan were in their crib, Lucas said. He wasn’t sure the fire department would get there in time.

He plunged into the burning building, quickly discovering that he couldn’t see anything due to the flames. But he knew his way around and headed to the basement.

He reached the crib and made physical contact with his daughters, “I was so happy they were responsive,” he said.

One of the girls was standing up in the crib, and the other daughter was laying down, but they were both quiet. He believes his daughters were in shock due the fire and smoke surrounding them.

Lucas grabbed his children, held them against his chest to protect them, and made his way back up and out, retracing his steps in the blinding smoke.

Lucas handed his daughters to his mother and then realized his niece was also still trapped on the second floor of the house. Lucas ran back inside and couldn’t find her, so he went to his backyard and saw his niece through the second-story window. He told her to jump through the window, and Lucas caught her with his hands.

“I was ecstatic my babies were OK and everybody was able to walk away from situation. We didn’t lose anyone,” Lucas said.

His heroism had its toll.

“My arms burned, both ears burned, right side of face burned, and my neck was burned,” Lucas said. He had second- and third-degree burns, and for three days Lucas was blind because his corneas were damaged and swelled up due to smoke exposure.

At one point, doctors told Lucas that he might not regain his sight, although he has done so.

“My vision I feel is back to normal, it could be better,” Lucas said. But he noted that his burns prevented him from doing everyday things.

Malaysia and Milan sustained serious burns as well. They were both taken to the Children’s Hospital of Michigan in Detroit and treated in the intensive care unit.

“Being Blessed Is Not All About Having Money Alone” – Nollywood Actress, Christabel Egbenya Says