The Manager of the Month curse is a common and well-known phenomenon.

Coventry won four games on the bounce in November, leading to Mark Robins picking up the award for the Sky Bet Championship.

I spoke to him last Thursday. Naturally, his side then went on to be defeated on their return to action on Saturday (sorry, Cov fans!), going down 1-0 at Reading.

The time we spoke before that, however, the curse took a very different guise to try and derail Coventry’s ambitions.

“The last time I won this award was in February 2020 so the curse of the Manager of the Month certainly took its toll then!” jokes Robins.

“Having said that, we still got promoted. So it worked out in the end.”

At that point, Coventry had won seven out of eight and were flying high at the top of League One. A return to the Championship looked inevitable until the pandemic curtailed the season.

Fortunately for Robins and Coventry, the Sky Blues were still promoted. It just ended up being another bump in what has been a chaotic tenure at the club – which is now edging towards six years. He is currently the sixth longest-serving manager in England.

It has at times seemed like the issues are never-ending. Earlier this month they were served an eviction notice from the new owners of the Coventry Building Society Arena.

For other clubs and managers this would be something seismic. For Robins it was just another day at Coventry City. Water off a duck’s back. 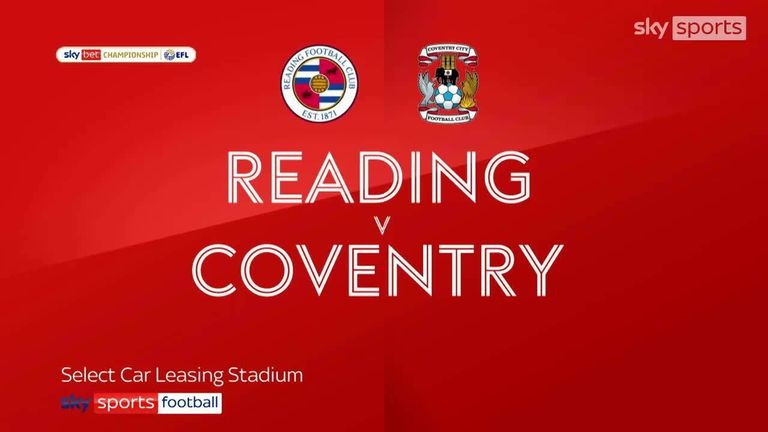 Highlights of the Sky Bet Championship match between Reading and Coventry City.

Through a series of points deductions, ownership issues, stadium problems and exiles, a global pandemic and more, Robins has led the club to silverware in the EFL Trophy, two promotions and then stabilised them in the Championship.

His secret? Dedicating his focus to what he can control.

“From my perspective it’s just about the health of the players and the staff,” he says. “Mentally and physically. That’s the biggest challenge for anybody.

“You can tell people have changed a bit since lockdown. They’re more anxious and uptight. But the players have been magnificent.

“I’m immensely proud of everything we’ve done and of everyone that has worked here.

“Things always change over time, personnel and players and such, but everyone who has been here has played their part from that moment.”

It is normal for a manager of a club to pay tribute to the fans for their support.

But few supporters in the country have been through more than those of Coventry City in recent years. Robins feels it, and he means it.

“The players deserve an enormous amount of credit, but we have an unbelievable support as well,” says Robins. “They are the biggest constant and have been magnificent.

“They enable you to do your job properly. That cannot be underestimated. They’re so much behind everything that gets done, and all the difficulties.

“They’ve been here and lived through all the issues of the last 15 years or so. I’ve been here nearly six years, it’s been tough but the players, the staff, the supporters, they all make it worthwhile.”

In many ways the issues at Coventry are starting to clear. The club are on the verge of a takeover from local businessman Doug King, who is set to take the helm from controversial owners Sisu after 15 years of turmoil and fan protests.

Robins is naturally a little wary, but also tentatively optimistic about what the future may hold.

“We’re still in a bit of limbo until the green light gets pressed,” he says. “But that should be any time soon.

“I’ve got to wait and see the detail of what the new ownership is going to bring. But you’ve got to be excited that things can move forward.

“And as long as it’s moving forward it doesn’t matter if it’s happening slowly. You’ve got to do things in a methodical, organised way to get to where you want to get.

“I do also have to say that [Sisu boss] Joy Seppala has done as much as she possibly can do to help us get to this point. It’s very, very difficult being the owner of a football club in circumstances such as ours.

“We’ve got miles more in terms of our budget than we had in League One, but we are still one of the smaller ones in this division. If we can eke that out a little bit and give ourselves an opportunity to keep players, but also to add to that it gives you a chance of having that depth and being able to cope with the next level.

“It gives us a lot of motivation going forward, and it may give us a little bit more in terms of being able to pad out the squad.”

It is hard to argue that any manager in England has achieved more than Robins in the last decade.

The next potential step is the hardest one to make, but with everything he has done so far, you wouldn’t bet against him completing one of the game’s greatest ever comebacks and taking Coventry back to the Premier League.

“We’ve got to aim for a consistent top-10 finish and then try to get the top six from there,” he says.

“If we can do that, who knows. But that will be the plan for a lot of teams, and we need that financial backing to get there, because like it or not that will make the difference.

“It’s been a real team effort to get to this stage, but there’s still loads of work to do. With the prospect of new ownership coming in things are looking really exciting.”

Whisper it quietly. The future for Coventry looks bright.

"I am still unmarried because of my child"