The fragile peace in the Ijesa axis of Osun State was shattered, Wednesday, when thugs attacked the Tinubu/Shettima campaign office in Ilesa and also injured Obisesan Olasunkanmi, the Chief of Staff to Timothy Owoeye, the Speaker of the Osun State House of Assembly.

Speaking with DAILY POST, Obisesan alleged that he was attacked by Dele Felix, the PDP Ward 8, Ifofin chairman on Sunday after his meeting with Babatunde Festus Komolafe, the member of the Osun State House of Assembly for Atakunmosa West.

In his words, “Immediately Komolafe left, six PDP thugs led by Dele Felix, the ward 8, Ifofin, Ilesa East Chairman attacked us with bottles of beer and ended up injuring Tola Omukanju and myself.

“We were taken to Wesley Guild Hospital for treatment, where I was stitched up in 5 different places. I got in touch with the DPO, Ijamo Division, Ilesa who released his men to give us protection

“Taiwo, Kehinde and Sunday Amure, Ajewole fisayo, Amure Dare and others were among the thugs that attacked us.” 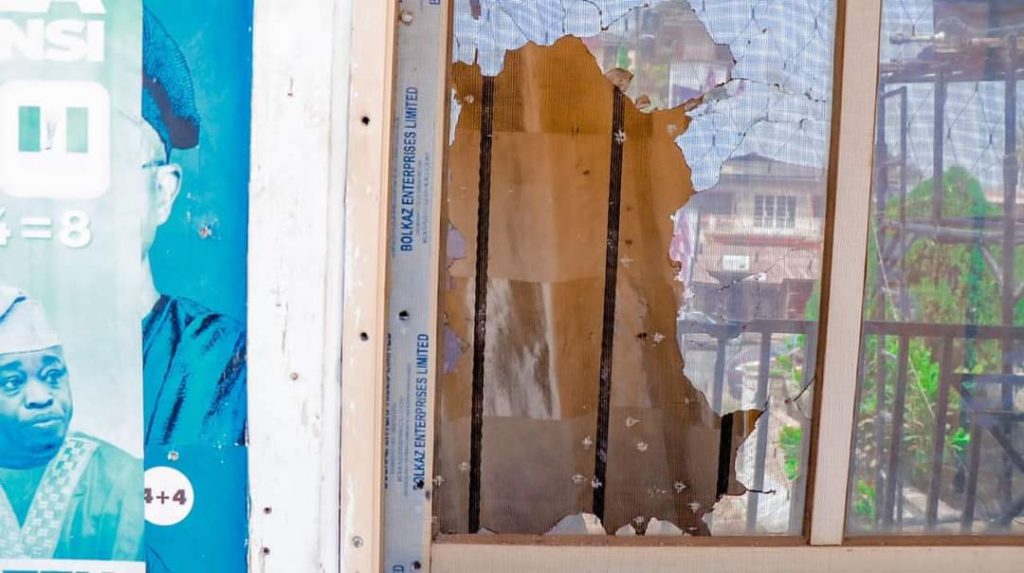 The Tinubu/Shettima campaign office, which also doubled as the office of Oluremi Omowaiye, a former Commissioner for Works in the Adegboyega Oyetola administration, was riddled with bullet holes and many of the glass windows were shattered as a result of gunshots fired.

However, the Osun PDP, Director of Media, Olabamiji Oladele, reacting via a phone call with DAILY POST, described the allegations of assassination attempt on Omowaiye as cheap.

While calling on the Osun State Police Command to thoroughly investigate what really transpired, he urged the police “to devise a means of punishing anybody who is in the habit of crying hoax when there is none.”

In his words, “PDP does not have anything to do with violence. As a party, our focus is to win the general elections in February and March. We are more focused on our campaigns, talking and strategizing with our people in Osun.

“Omowaiye’s attempt to curry unnecessary sympathy from the members of the public is a realization of the dwindling fortunes of his party and his person.

“They should stop attaching unnecessary importance to themselves. When we were in the opposition we had capable hands who won elections for the PDP, so we don’t need to now attack an unknown COS to the Speaker.

“Such allegations are too cheap. We want the security agencies in the State to go all out and conduct a thorough investigation in order to forestall any breakdown of law and order.

“The police should also devise a means of punishing anybody who is in the habit of crying hoax when there is none.”

Reacting, the Osun APC in a statement signed by Tajudeen Lawal, the acting State chairman condemned the dual attacks on the Tinubu/Shettima Campaign Office and the Speaker’s CoS In Ilesa.

He also called on the Nigeria Police and other security agencies in the State to investigate the attack.

Lawal said, “I continue to wonder when I read the offensive diatribe of the Osun State PDP caretaker chairman shortly after the report of the attacks of our members if blood is actually flowing in his veins.

“Must politics be taken to the level of wilful attacks on the opposition without any just course other than the fact that the sharing of different political ideals?

“The embedded kernel of the Adekunle’s hogwash was simply the perpetual jittery of the PDP handlers each time they heard Oyetola’s name.”

Meanwhile, the Osun State Police Command has stated that it is investigating the matter.

In a phone chat with DAILY POST, Yemisi Opalola, the spokesperson of the Command confirmed the incident.

She explained that the incident was reported to the police in the State and that the command had commenced investigation to unravel what really transpired.